The special class of Electrolyots close to the Ecomobiles and VTOL where the Vortical Systems of Hovering and Thrust are also used is represented by the Aircrafts with Ordered Trajectorny of Motion (flight), – (AOTM) which are lifted off from a support surface and fly along directing paths under an operation ofaerodynamic forces. Necessity of consideration of the aircrafts of such type which usually attribute to the High-Speed Ground Transport (HSGT), together with the commercial Electrolyots (Vihrelyots) of free flight is connected to a basic generality of these aircrafts. First of all, they are intended for fulfilment of transport problems not soluble by conventional passenger planes and an urban transport – of speed transportations of the passengers on a principle door-to-door, i. e. immediately between passengercreated centres inside cities instead of remote on tens of kilometers from them by the country airports.

It is possible to specify and a historical generality of the aircrafts of considered classes: the society need in them has arisen on a boundary 50’s and 60’s simultaneously with appearance of many-placed passenger liners of the civil aviation and called by them of increase of volumes of air transportations. Moreover, as well as for the VTOL despite of intensive efforts of the scientists and designers in area the HSGT, for past third years was not possible to work out even of a unified sight on the given problem and furthermore to create a transport system suitable for actual use. Reviving in the last years interest to the High-Speed Ground Transport has removed on repeated and so, under our judgement, fruitless study of engineering solutions – the linear engine and magnetic suspensionwhich it was not possible to execute in 60’s and in 70’s.

By the basic methodological error in this problem was the fact, that the given problem – creation of a contactless high-speed transport have primary begun to decide as version of its ground kind though the transport means lifted off from ground, should on determination be named aircraft, thus it is not so important whether it flies at altitude 10 km or 10 mm.

As the flight support at vanishingly small altitude to the experts in the field of a ground transport is represented more actual with use customary for the given kind of electromagnetic systems main requirement to a high-speed transport means – minimization of its weight was completely discarded. It unequivocally results in low economic parameters of a carrier on the magnetic suspention and creates other practically insoluble problems. One of them – small magnetic disgrace (about 10 mm) requiring of automatic control and eliminating a capability of maintenance in cold season owing to deformation of a travelling structure and formation ice at melting of snow. Other problem – person unacceptable for an organism level of magnetic fields as inside cabin and immediately near to a transport means.

By the next basic error of the “railway” approach to the given problem was in the literal sense its linearity, i.e. affection to a travelling structure which, with another hand, very difficultly and sometimes it is impossible “to fasten” in a transport network.. At the same time it is well-known that the public transport can become profitable only by activity in a network where losses from day and night time “non-loading” smooth out and there are the reserves for removal of peak power loads morning and evening hours, as the economic characteristics of a transport with a ground travelling structure in a strong degree depend on size passenger flow (Fig. 15). 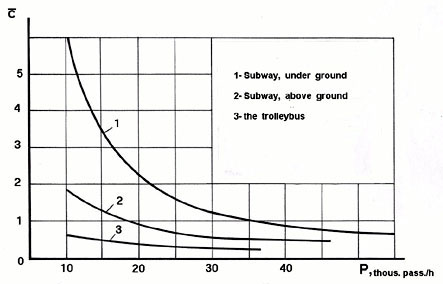 Fig. 15 Dependence of change of the relative cost of transportation from value passenger-flow and kind of a travelling structure.

In an ideal the contactless carrier should have a capability not only easily to be switched on other travelling structure but also to descend with it, to move in an operational mode, if it is required, even on a usual road. These, the one should think alternative requirements are easily realized if to consider transport crew the HSGT as an aircraft, moving on small speed on a road (analog drive of a plane) and flying up on the wheel chassis with consequent transition on cruise speed on a dynamic air cushion. Thus it is necessary to mark that such air cushion arises under a contactless transport means always automatically transforming it in an aircraft flight on ordered trajectorny. Therefore, not entering in a conflict with a Mother Nature, developer it is necessary only to give a transport means the form, ensuring obtaining of maximum aerodynamic force, in parallel caring about minimization of its flight weight. In limiting, i.e. the most expedient from a point of view of economy case, when there are not enough consumptions on energy and weight for maintenance of the magnetic suspention and linear propelled engine, the Aircraft with Ordered Trajectory of Motion (flight) (AOTM) is received, the lift and thrust of which are created by an aerodynamic way. Due to decrease of a structure weight and increase of speed of flight it should have high economic parameters.

The Speed Modular Transport System (SMTS) (Fig.16), developed in the RTC VZLYOT on above mentioned principals, provides the best techical and economic parameters on a comparison with any other transport systems. Its basis is made by the Transport Module (Fig.17), design of which allows it to execute speed moving on an air cushion along directing paths and at the same time, similarly to the automobile, to go on usual roads. The modules on a moving can joint in trains with appropriate increase number of passengers.

Singularity of an offered transport system is a universality that is reached it separated on an unite elements (modules) from which it is possible to collect the transport systems of various assigning. Even the Transport Module is divided into removable passenger interior (the cabin) and working platform which at a small passenger loading, for example, in night time, can execute cargo container transportations. In a system are incorporated full automation of motion initial separation of the passengers on directions and nonstop pass of a transport means past transport stop if on it does not happen come in or get off of the passengers. These positive properties are supplemented, as was said above, capability of movement of the module on usual roads and connection (or disconnection) them in trains during motion. It increases a channel capacity of a transport system. Besides as well as at any transport aircraft high speeds of contactless motion measuring in hundreds kilometers per hour are here assumed.

The considered system is intended mainly for a speed urban transport. It is capable to unload urban lines and to protect urban environment from exhaust gases of the automobiles at preservation that of a level of comfort but essentially increased speed and safety of motion. At the same time, it can be applied also as long-distance with a perspective of creation regional and national transport systems, ensuring similarly to the items of mail, automatic delivery in a specific point of the passengers and freights on a code collected in a point of departure.